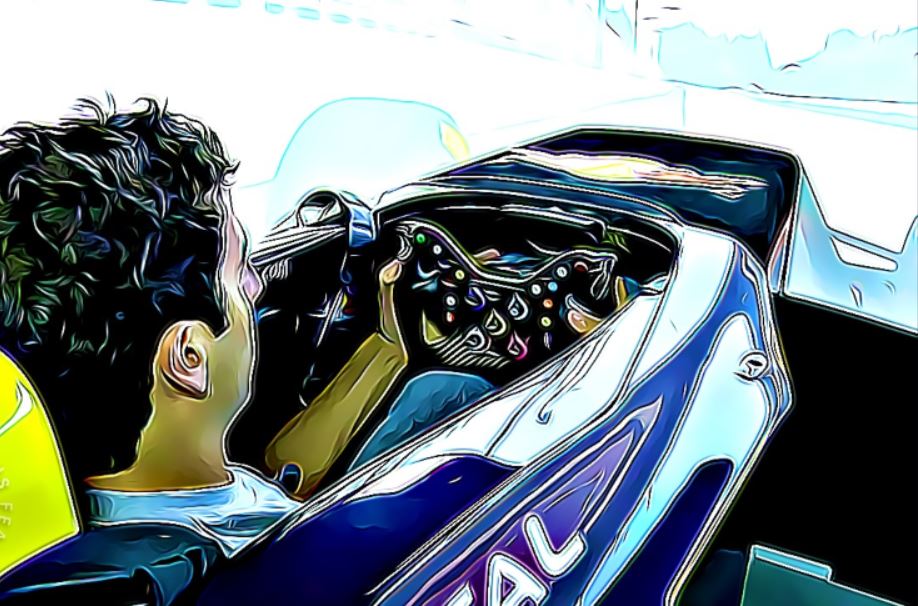 Ricciardo has changed his tune on sim racing

For the first time he is pricing out a home sim rig and thinks simulators are now at a level where he can gain training value. “At first, I thought it was just something fun to pass the time, but I definitely see that there’s a bit more to it now,” he recently told Autosport in a interview.

“Some of the sim racers, they’ve been able to transfer their skills into a real car and that’s been a bit of an eye-opener. We talked about F1 1995, and that was very different to what we have now. So probably for a while, my head was in the place of ‘ah, it’s just a game’. Now it’s like what can I really learn from it?”

Ricciardo now believes sim racing can help keep himself focused and mentally prepared for the real-life moments when he has to deliver.

“The biggest challenge that I’ll say all of us F1 drivers have is we only get a few chances each weekend to put a new set of tires on and do the perfect lap. There’s sometimes three weeks in-between races, and then at the end of the season there’s two or three months. It is crazy, for a sport that’s so precise, and there’s so much technology involved, and with such precision, that it’s hard for any of us to ever really be perfect because we just don’t get the mileage.”

“That’s where I’ve definitely been more open-minded. I’ve always liked the F1 simulators, but with the home stuff, for the last six to 12 months, it’s been about getting those lap repetitions in.

“I think it’s really important and, even if the car is not the same car, it could even be a GT car for example, it’s about putting yourself in that environment of like: ‘OK this is the lap, I’ve got to nail it.’ It’s a bit of a mental thing, of trying to put the pressure on yourself.”

Ricciardo explained that perhaps in the past he looked down on sim racing. But now things are very different.

“I’ll be straight with you like – at first, I was also like that because racing, let’s say the real stuff, is what I’d done my whole life. Obviously I have my pride in that, and you know that if you hit a wall it hurts. And the sim doesn’t hurt. So I guess there is pride there or whatever. But now that we’ve seen some sim racers transfer into real race cars, and actually show promise and talent and skill, it’s like, OK, I don’t disregard them like they are just kind of couch potatoes playing at home. I think there’s definitely some real skill and effort put into it. So I certainly respect it and I’ll be honest, it has surprised me how good they can be. Even if they haven’t jumped in a real car I think they would be alright. But the big question is the fear. Can they put the fear aside and know that, OK will that wall hurt or whatever? But I think from a skill point of view, it’s pretty impressive.”

Ricciardo says there are certain areas where simulators mimic some of the real-life experiences pretty well.

“If I go back a bit of time where, even things like kerbing and grass, it was all just very flat,” he says. “All the tracks felt the same and it didn’t really capture undulations and things like that, so there’s a lot more feel now. There’s a lot more response through the car with sliding,” adds Ricciardo. “You can catch it a little bit more, whereas back in the day it was what I would call ‘arcade’. You’d have either 100% grip or you’ve got like zero grip, so there was no feel. Then, I think as well with F1, a lot of laptime we find on track is on exit. If you can get on the throttle early then, with rear-wheel drive, you’ve got so much power that your lap time just accumulates into something obviously fast. With video games, a lot of the time you used to get came from being able to brake so late, and the use of some of the assists. But I think now the lap time, and how to go fast, correlates to on track. We’re kind of slow in, fast out, I feel like that’s how I will achieve the best lap times. So, even from that point of view, it’s got more realistic.”

“It’s got closer,” he says. “There are things like track maps, which are kind of underrated in how close the track can look and feel, compared to the real one. That’s where the sims are near perfect because the F1 teams can do all the measurements on track, and get all the elevations and cambers and so. And that’s now where the F1 game has come a long way, and I think that’s very close on, I’d say, most circuits.

“I think with even things like locking a brake, and traction and all that sort of stuff, it’s hard to put it in percentages terms. But I’ve always said that, if the F1 sims are maybe 80% real compared to the real car, then the games at home used to be maybe like 30%. Now, they are well above 50%.”

“Some of the sim racers, they’ve been able to transfer their skills into a real car and that’s been a bit of an eye-opener.”